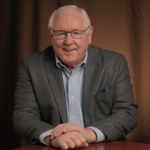 TYLER — The longest-serving pastor in the life of Green Acres Baptist Church will be retiring August 31. On Wednesday, Pastor David Dykes told KTBB News how his call to ministry began. “I did have a pretty dramatic call experience, like some of the people in the bible, like Gideon and Moses…in the sense that I was sitting in a service one night with a bunch of other teenagers and the preacher, who was maybe middle-age at the time said, ‘God called me to preach when I was 17 and I have been doing it ever since.’ I happened to be 17, and there was just a voice that was louder than an audible voice that said in my heart, David that’s what I want you to do.” Pastor Dykes has served at GABC since March of 1991 and has lead the church to over 17,000 members.

Pastor Dykes went on to say he doesn’t think that people were surprised by his announcement of retirement, “Because, over the last couple of years, I have been dropping hints about retirement and we have been trying to sort of prepare the church for transition.”

Pastor Dykes is said to be assisting church leadership in the search for his replacement. Learn more here.