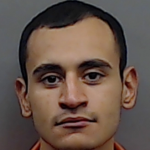 TYLER — The trial began Tuesday morning for a Tyler man charged with murder in a 2018 shooting at Tyler’s Westwood Shopping Center, and who police believed was connected to four other fatal shootings in Smith County. According to our news partner KETK, 28-year-old Kristian Perdomo was arrested after authorities said they believed the shooting was gang-related. Law enforcement claimed at the time that Perdomo was suspected of being the gunman in five fatal shootings in less than two weeks. However, more than three years later, he still has only been charged with one count of murder.