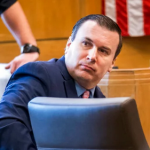 TYLER — The jury has sentenced 37-year-old former nurse William George Davis to death, just hours after beginning deliberations. The defense wrapped up its penalty phase case Wednesday after jurors heard from the prosecution. According to our news partner KETK, Davis worked at CHRISTUS Trinity Mother Frances in Tyler at their cardiovascular ICU wing and was convicted of capital murder last week for killing multiple patients. Under Texas law, the only two sentencing options were life without parole or the death penalty. An appeal is automatic in the case.

His legal team faced an uphill battle due to a large number of victims in the case as well as phone calls that were placed by Davis from jail last week where he admitted to killing patients to his ex-wife and berated the jury to his brother. These calls took place just hours after the verdict and were played for the jury to hear Friday afternoon. The defense called a handful of witnesses after the prosecution rested their case for a death sentence Tuesday morning. They called to the stand his brother, a friend from high school and an old football coach.